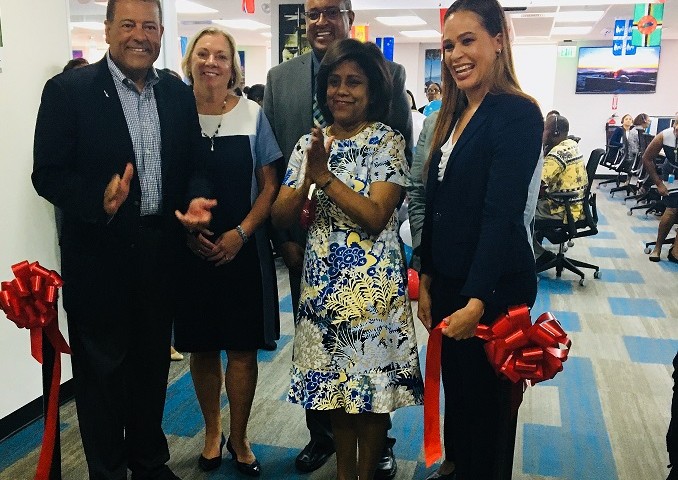 18th July, 2018: Trinidad and Tobago continues to attract international firms which create new employment opportunities for its citizens. Over 100 persons have been employed to provide support at international airline carrier American Airlines’ reservation centre in Port of Spain. The new offices, which were formally opened on Tuesday July 17, 2018 in Maraval service the Caribbean, the Pacific, the Americas and Europe.

According to the Minister of Trade and Industry Senator the Honourable Paula Gopee-Scoon who spoke at the formal opening of the centre, “This event further expands and adds value to the country’s Business Process Outsourcing agenda. The one hundred plus employees hired by American Airlines builds on the 600 jobs already created by iQor, the 750 opportunities generated by Scotia Bank’s recently established back office support and BHP Billiton’s local operations.”

Mr Wellesley Joseph American Airlines’ Country Director expressed pleasure with the existing operations “This is a major point of pride for our local colleagues as it highlights the importance of our people and our country to American Airlines.”

The government through the Ministry of Trade and Industry (MTI) continues to pursue and enable new investments in the Trinidad and Tobago. The MTI plays a major role as a key investment facilitator in the non-energy sector supported by state agency InvesTT.