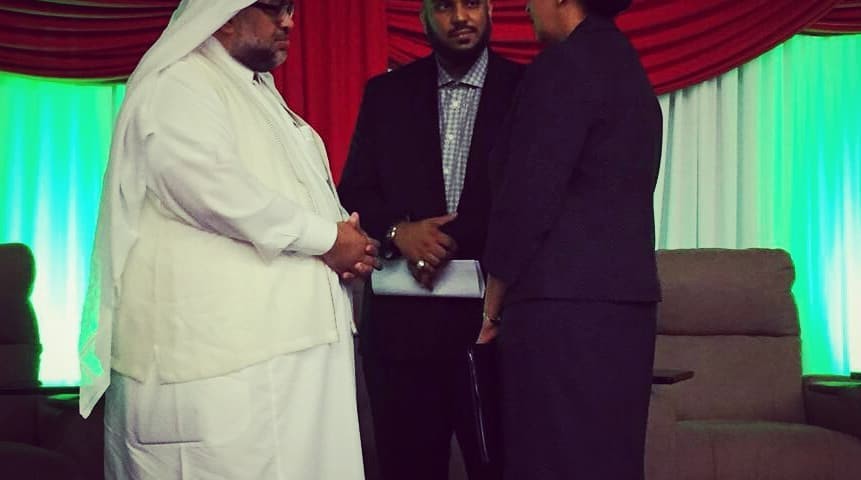 March 29, 2018:- As the Trinidad-Saudi Chamber of Commerce (TSCC) moves to forge stronger, commercial ties between Trinidad and Tobago and Saudi Arabia, the First Annual Trinidad-Saudi Arabia Business Forum “Supporting Regional Investment Collaboration” was held on March 28, 2018 at the Hyatt Regency. In addressing the audience, Acting Permanent Secretary in the Ministry of Trade and Industry, Ms. Frances Seignoret, said “Trinidad and Tobago and the Kingdom of Saudi Arabia have long histories in the area of hydrocarbon development, and we are both at a cross roads, where there is an urgent need to transform our economies to meet the challenges of tomorrow. This requires a major shift in our relationship with technology, with one another and with our environment, and will ultimately shape our future well-being.” Ms Seignoret affirmed the timeliness of convening such a forum to foster greater understanding of the opportunities to be exploited on both sides resulting in concrete commitments towards a mutually beneficial partnership.

The acting Permanent Secretary highlighted the attributes of Trinidad and Tobago as an ideal investment destination and, within the framework of the National Development Strategy 2016-2030 (Vision 2030), outlined some of the initiatives and projects being undertaken to build globally competitive businesses and improve the investment climate. She said “As the leading producer of oil and gas in the Caribbean, Trinidad and Tobago maintains the most favorable economic climate in the Caribbean region, marked by relatively low inflation, a stable economy, and a well-organized and robust financial system. As a result, we have earned a reputation as an excellent investment location and a premier destination in which to do business with over 400 multinational companies already established here”.

Mr. Shazaad Mohammed, TSCC President outlined the historical ties and similarities of both countries and identified opportunities in tourism and trade which could be of mutual benefit.

Providing further insight into the vision of the Kingdom of Saudi Arabia, keynote Speaker Dr. Ebraheem Alabbady called for greater engagement and more formalised systems to facilitate trade and investment. He cited several sustainable projects underway and the current policy thrust which is punctuated by outward investment and participation in the economies of countries across the globe including Singapore, Maldives and the United States of America. The future of investment into Saudi Arabia is very promising he re-iterated. The inaugural forum brought together interests of both countries for dialogue, networking and information-sharing with the intent of increasing trade and business relations.

The Ministry of Trade and Industry has responsibility for growing trade, business and investment in the non-energy sectors of the economy. While energy, including renewable energy and clean energy, remain of importance, new business clusters have been prioritized in Vision 2030 in seven key areas: financial services; maritime services; aviation services; fishing and fish processing; agriculture and agro-processing; software design and applications; and the creative industries. In the context of CARICOM, Trinidad and Tobago enjoys trade agreements with Colombia, Costa Rica, Cuba, the Dominican Republic and Venezuela and long standing trade arrangements with the United States, Canada and the European Union. A Partial Scope Trade Agreement with Panama is in effect.