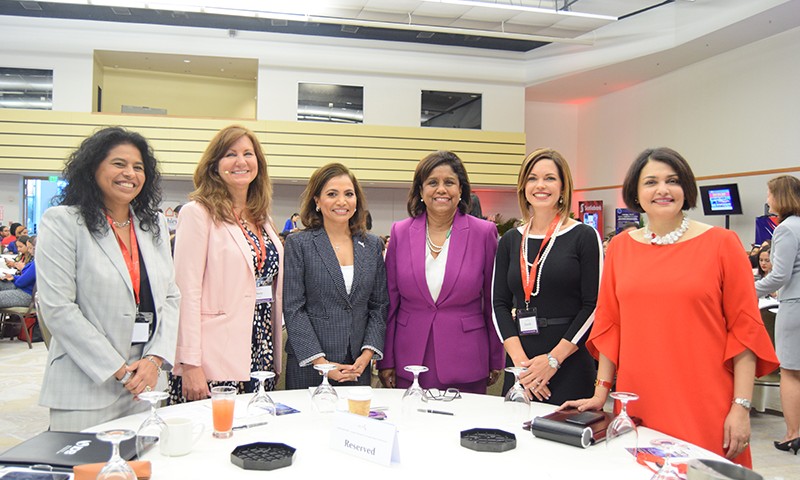 March 15 , 2019: – Minister of Trade and Industry, Senator the Honourable Paula Gopee-Scoon while examining the issue of gender parity and female leadership at AMCHAM’s 2019 Women’s Leadership Conference in Port of Spain shared the State’s perspectives in the area of gender equity. “The Government recognizes that each individual must be given an equal opportunity to contribute and to self-actualise regardless of race, gender, ethnicity or socio-economic background.”

The Government, she added, acknowledges the significance of female involvement and gender affairs. Gender equality is not just a women’s issue, but also a business issue.  Minister Gopee-Scoon shared available figures that indicated that women represented a growth market more than twice as big as China and India combined, in which they controlled $20 trillion in consumer spending, owned or operated 25-33% of private businesses and earned an estimated $13 trillion.

According to the Minister, women possess immense economic power “Your spend,” she told the audience,  “has tremendous influence and opportunity. The enormity of this consumer market presents opportunities for business and influence. Let us continue to expand this power, determining untapped niches and innovative solutions…. if we all continue to play our part…, there will be a bright and balanced future.”

The second female President of AMCHAM Trinidad and Tobago Ms Patricia Ghany, in delivering remarks at the event said a gender gap continues to exist. The solution, she added, requires collaboration across sectors to realise the 50/50 dream where fully empowered women contribute equitably in all segments of society. AMCHAM, she said, continues to act to address this imbalance.

Feature speaker Ms Suzy Teele provided insight into harmonising the multiple components of life managed by successful women. “There’s never been a better time to be a woman” she said, “…we have made significant advancement, but there is much more work to be done.”  While women today do have a voice and there has been major progress in economics, business and society in general she stated, there is a need for all empowered women to use their voice and leverage their economic participation to ensure success.

The AMCHAM Women in Leadership Conference highlights the social, cultural, political and economic achievements of women and their role in society.