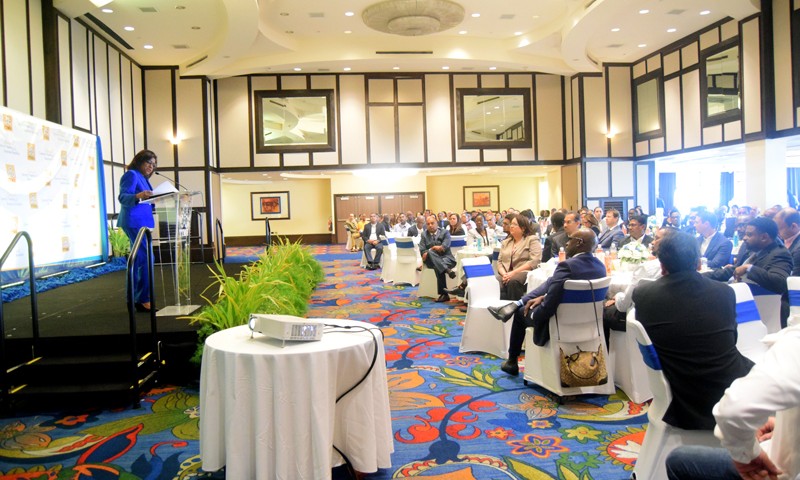 April 12, 2018:- The Minister of Trade and Industry Senator the Honourable Paula Gopee-Scoon is reassuring the business community of the Government’s continued commitment to growing exports and facilitating investments. Focusing on the manufacturing sector which she cited as “a catalyst necessary for transforming the economy and achieving diversification,” the Minister identified several ongoing initiatives which address some private sector concerns with state bureaucracy and also align with the National Development Strategy Vision 2030.

Speaking at the Trinidad and Tobago Manufacturers’ Association Annual General Meeting – Business Breakfast Meeting on Tuesday 11 April, 2018, Senator Gopee-Scoon, assured local manufacturers of the Government’s intent of a sustained partnership to improve overall exports with a focus on CARICOM. She said “manufacturers have a strategic role to play in accessing the wide ranging opportunities available in the Caribbean Community and the Ministry of Trade and Industry is committed to strengthening and building relations within the region.”

According to the Minister, while the top non-energy exports include cigarettes, cereals, cement, aerated beverages and sweet biscuits, overall, exports to CARICOM countries have declined by TT$1.4 billion, which is approximately 34% over the last five year period 2013-2017. The main cause of the decline rests with a fall in energy exports and energy prices. This situation however presents an opportunity for the non-energy sector to increase its share of exports to the regional market. The collaborative inputs from both public and private sectors will assist in this regard.

In relation to manufacturing, the Ministry of Trade and Industry is also pursuing initiatives focused on increasing the sector’s competitiveness. These include the strengthening of entrepreneurship development systems; establishing centres of excellence and technology parks; developing a new and enhanced suite of incentives; implementing an export/trade strategy; ensuring that the quality of national goods and services conform to international standards; developing existing economic sectors; and supporting new and emerging sectors. The manufacturing sector continues to be a major contributor to the Gross Domestic Product (GDP) of Trinidad and Tobago, accounting for 9% of GDP in 2017.

The Ministry of Trade and Industry has also spearheaded several initiatives to improve the country’s investment climate and to create a welcoming environment to all investors. Some of the major improvements targeting the business community with the aim of increasing the estimated TT$160 million invested by manufacturers in Trinidad and Tobago in 2017 are:

In spite of the current financial challenges, Trinidad and Tobago remains a good place to do business. There are a range of trade agreements which offer the manufacturing sector a sustainable destination for their exports with CARICOM, Latin America and Europe. The Ministry’s measures are an indication of Government commitment to improve the business environment and ultimately save time and money for the business community.

According to the Minister, the private sector plays a pivotal role in the growth and development of the country particularly in the current economic times. Calling for greater collaboration to ensure the progress of the sector, she urged the private sector to “continue to collaborate with the Government in targeted areas of interest. The TTMA,” she added, “has a significant role to play in motivating its membership to enhance investment, trade and business, while the Government must continue to institute measures and aid in facilitating manufacturers to accomplish trade, investment and business expansion with an intense focus on easing bureaucracy.”