Trinidad & Tobago to become a center of excellence in standardization 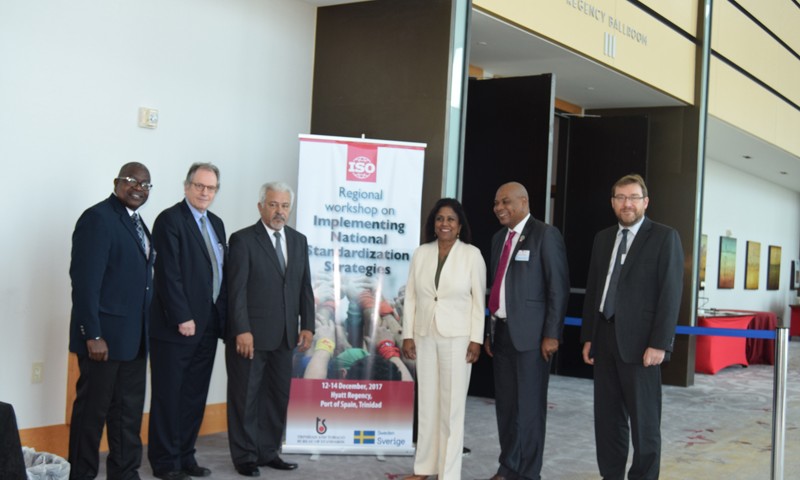 December 19, 2017:- Senator the Honourable Paula Gopee-Scoon, Minister of Trade and Industry announced that a regional Committee for Technical Barriers to Trade (TBT) has been formed, in keeping with the country’s strategic focus on standards. According to the Minister “This Committee will play a strategic role in developing and providing regional positions on issues impacting regional trade, including manufacturing. Its work is also intended to address strategic national concerns regarding long term sustainability as outlined in vision 2030.” The Committee is the result of ongoing work being undertaken by the Trinidad and Tobago Bureau of Standards (TTBS) and the Ministry aimed at creating the National Quality System (NQS). The NQS includes both Infrastructure and Policy as part of a larger framework governing local standards.

Speaking at the  International Organization for Standardization (ISO) Regional Workshop themed “Implementing a National Standardization Strategy” held on Tuesday 12 December, 2017 the Minister of Trade and Industry stated “Today standards, continue to play an integral role in both trade and business competitiveness across sectors directed by regional and international partnerships. These arrangements aid in the formulation of guidelines for materials, products, processes and services and also safeguard producers and consumers.”

As Trinidad and Tobago seeks to improve trade and achievements in the area of standard setting the TTBS is working to establish centres of excellence in specialist areas. This includes improvements to the metrology infrastructure with the establishment of the Caribbean Reference Laboratory (CaRL) for temperature measurements as well as creation of a regional Centre of Excellence for the testing of energy efficient lighting products. These developments will play a significant role in local businesses reaping the benefits of global trading opportunities. To this end, Mr Lawford Dupres, Chairman, TTBS also stated the enterprise is considering the adoption of ISO standards pertaining to cocoa beans to support the national thrust of economic diversification in the agricultural sector, in keeping with the company’s mandate to develop, promote and enforce Standards and Codes.

Senator Gopee-Scoon affirmed the irrefutable link between standard setting and trade during her Feature Address. She also noted that “Regional Governments are well aware of the wide reaching benefits of standards and continue to support the engagement of national, regional and international stakeholders in fora such as these to streamline standardization and formulate strategies for the development and rationalization of product and service standards to facilitate trade. In CARICOM, as is the case in the European Union, standards play a lead role in enabling the Caribbean Single Market.” She also highlighted local strategies currently being implemented by the Ministry of Trade and Industry, “Our National Quality Infrastructure Policy has the potential to impact and improve both trade and competitiveness of local offerings while also promoting and improving local standards.”