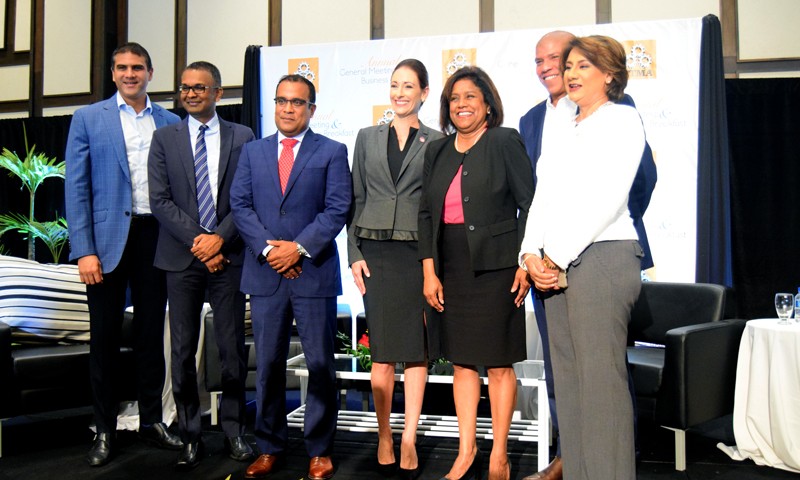 04 April, 2019: – Minister of Trade and Industry, Senator the Honourable Paula Gopee-Scoon advised local manufacturers to seek out and penetrate new markets beyond CARICOM.  Speaking at the Trinidad and Tobago Manufacturers’ Association’s (TTMA) 63rd Annual General Meeting on April 2, 2019 Minister Gopee-Scoon encouraged manufacturers to innovate and continue collaborating with the Government with the intent of strengthening and growing the sector’s contribution to the economy.

Citing the 60,000 jobs generated by manufacturers, the Trade and Industry Minister stated that the sector continues to be a major contributor to GDP and national employment. “The Manufacturing Sector is sustaining and creating jobs.” While the State is pleased with the performance of this segment of the economy there are opportunities for its expansion. She added that CARICOM is saturated and markets including Cuba and those outside the region can be accessed with the assistance of export promotion agency exporTT which has been supporting local firms entry into Cuba.

The Minister also advised the TTMAs membership to continue to invest and re-invest in their operations, while the Government creates the eco system required for their further expansion. Minister Gopee-Scoon also committed to further deepening the existing collaboration with the TTMA through dialogue with its newly elected President, Ms Franka Costelloe-MacKenzie.

Ms Costelloe-MacKenzie, in her maiden speech at the TTMA’s AGM, committed to building upon the relationship established by former Presidents with stakeholders including the Government. She pledged to reposition the TTMA as a model of production. “In 2018, the Manufacturing Capacity Index for Trinidad and Tobago was at 68%. In my opinion it should be improved to 150% of our current ouput” she said. She encouraged the Government to further assist with increasing foreign investment and the revision of existing legislation. The private sector, she added, will be encouraged to increase its skills and capacity with the goal of doubling production for the export in manufactured goods in five years.

The Minister of Trade and Industry also committed at the event to supporting the development of a stronger more resilient manufacturing sector in partnership with the TTMA. “We are looking forward to the implementation of targeted initiatives to our mutual benefit,” she indicated.